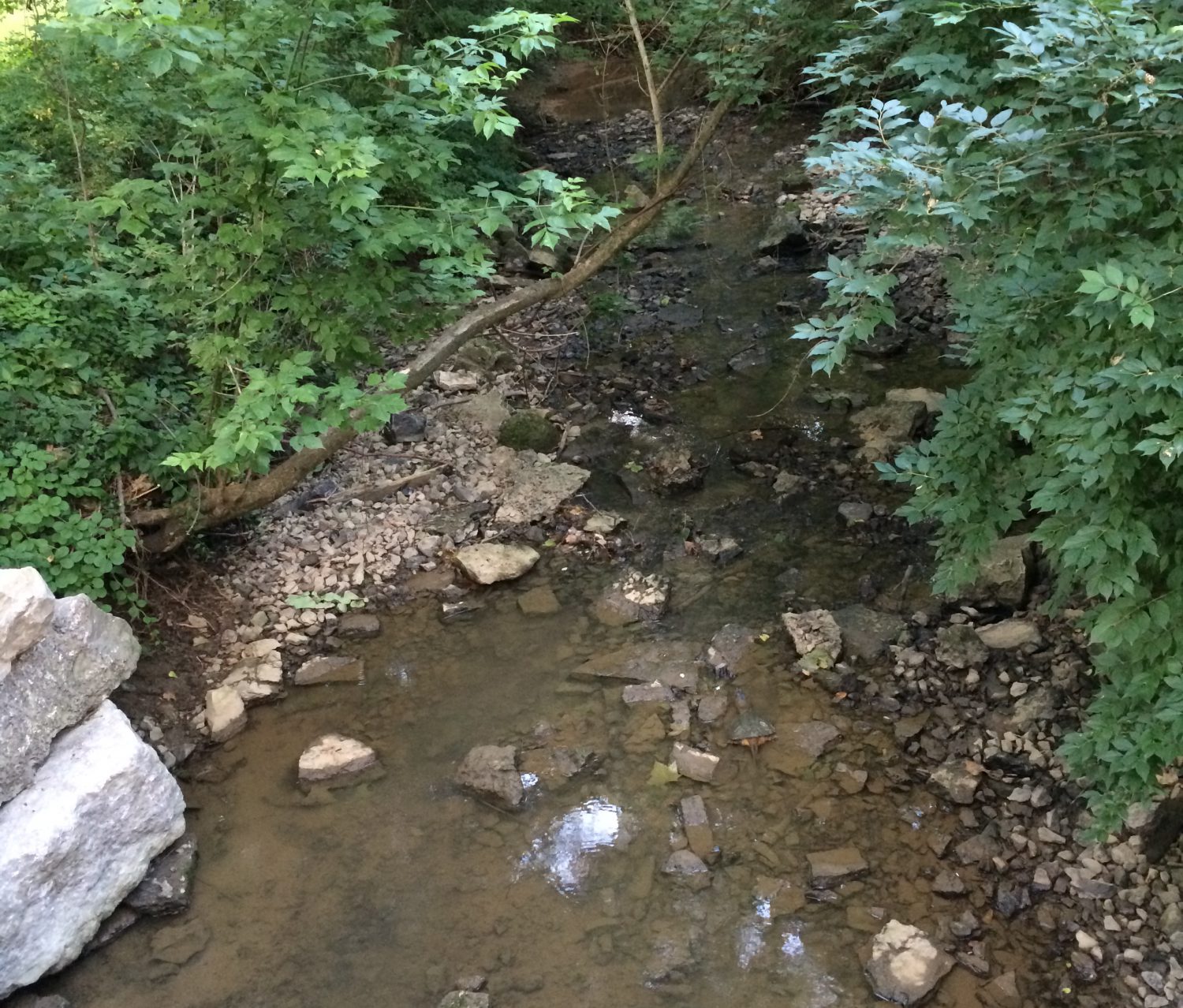 I do not know what I am doing. How do I get a row of tabs across the page? Make everything look better? Clicking around on random tutorials confuses me. Decades ago, a pompous therapist said I was wandering around like a blind pig in the woods, and that is what this feels like. 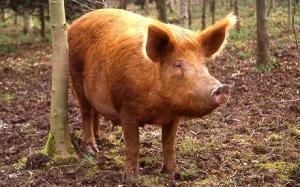 Here’s a sample  question.  How do I get rid of that extra space up there?

Does anyone else flounder around before wondering how to do things?  In Education-speak, I am a haptic learner, someone who doesn’t read or listen but charges around on her own and drives teachers crazy. Most of the time, charging around is pretty fun,  but right now it might be easier to follow a little structure.  Flipping through pages and index hopping still beats clicking on links.  Who knows about a good, EASY book about blogging?  The idea seems sort of counter intuitive,  and I would rather tell you all about this year’s gardens, but . . . 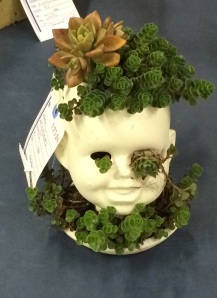 P.S.  This post was supposed to take about ten minutes and it has probably been two hours. 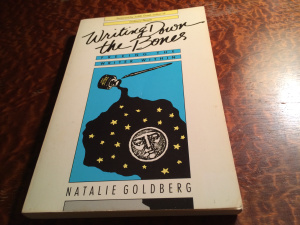 Through this book, Natalie Goldberg taught me a whole lot about spilling everything on to the page and finding material from the  result.    When I named the blog Writing Practice, I was using her ideas.  For that reason, this picture and explanation should go in the header, but I haven’t figured out how to get it there as a thumbnail image.  So, Natalie, I do not want to plagiarize you, but right now, this is my best shot at fairness.

Many of topics want out of my brain: this year’s gardening, teaching tales, responses to novels, and many more.  Getting my first leg and bikini wax (at grandmother age), however, is my latest adventure.  Think about the position a woman assumes in order to let the aesthetician rip out the pubic hair.  In Yoga, they call it the Goddess Pose. To me, the posture seems awfully submissive, especially when I am trying to be less like a marshmallow and more like  Kali (Hindu) and Vajrayogini (Buddhist).

Considered violently compassionate, they kill the ego in order to lead us to enlightenment, and these two figures seem to be the same. The ego  is the part of us that wants to be separate from everyone else, that part of us that does not want to be part of the Tao, the Universal Mind, God, etc.  The ego wants to be one shining drop of water instead of the whole ocean; it is the part of us that wants to be good, bad, the best, the worst–separate.  As far as the goddesses go, additional research may show whether anything more than the names change between the two traditions.  While you are waiting or searching for that information, however, you might enjoy these pictures.  Look how happily Vajrayogini  dances with her necklace of skulls. 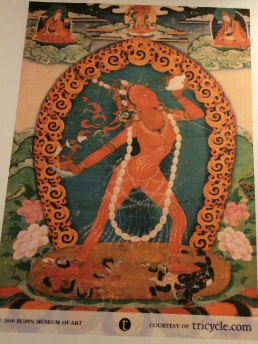 Happy to kill the ego

See how Kali sticks her tongue out at anyone who tries to understand her.  Look carefully: 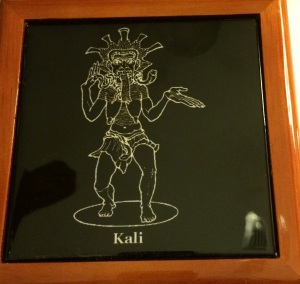 On the western side, the Greek Goddess Athena represents wisdom as well as war.  If you are familiar with The Iliad, you know that Athena supported her favorites in the Trojan War.  All of the Greek gods and goddesses took sides, but Athena was quite fierce on the proud Achilles’ behalf. (stay tuned for picture).  The Israelites were wandering around in the desert around the time of the Trojan war (or around the time Homer’s poem was being performed), and some of the Jewish women were bold.  Consider Judith and her murder of Holofernes.  She saved her people by first drugging him, then driving a tent peg through his head and  cutting herself a trophy. ( This story is in the book of Judith, which is in the  Apocrypha and described as an addition to the book of Esther. ) 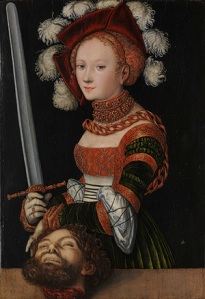 Judith and Holofernes  as imagined in 1530

By the time folks became Christians, however,  the women excelled at suffering. Of course, that may be inaccurate or unfair or both. Still, the photo below is Donatello’s sculpture of Mary Magdalene in the desert.  She is certainly not a physical warrior. 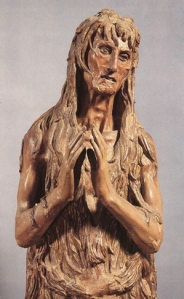 One image of suffering by Donatello (Mary Magdalen in the Desert)

Saint Joan of Arc subverts the weak sister paradigm, but look what happened to her. 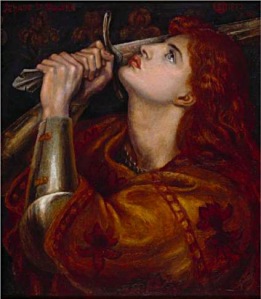 Joan of Arc by Rossetti 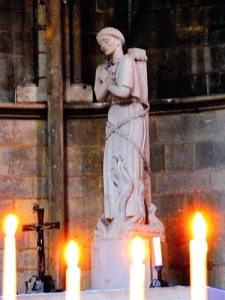 Sculpture of Joan. Suffering as an object of devotion

Before I knew the bitches were parts of my own ego, I wrote stories about two of them.   Witchy Poo  is my internal editor.  She yells at me for being self indulgent.  Mrs. Blutmore, a giant rabbit with sharp teeth, is mad because I ignored my imagination for many years and still don’t make time to write stories.  Baba Yaga, a deadly witch in the Russian tradition is a fairy tale favorite.  Very wise and powerful, she kills anyone who is dishonest or stupid.

When I started this post in May, all of this goddess and ego business frustrated me, so I went to my place of peace:  a neglected flower border.  Digging in the dirt beats thinking any day.  Here is  the first  garden picture of 2014: 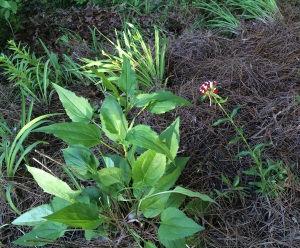 Now it is July and I am still playing around with this very first post that now may need its own page and a bibliography. What do you think about goddesses and ego?  How much would you rather create something with your hands?

Spiritual Dimensions of the Law of Attraction. . .with Celia Hales

Daily Devotionals on Writings Received from the Celestial -- A COURSE IN MIRACLES, A COURSE OF LOVE, THE WAY OF MASTERY, and CHOOSE ONLY LOVE

The Art of Blogging

Horses, Life, A Touch of Geek

The latest news on WordPress.com and the WordPress community.